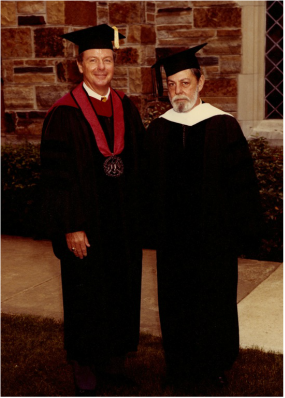 Shelby Foote with Southwestern president James Daughdrill, 1982. Box 35, Folder 7, Shelby Foote Collection, Rhodes College, Memphis, TN.
In 2010, Rhodes College in Memphis, Tennessee, acquired Shelby Foote’s personal papers and library.  Foote’s connections to the city and to the college were strong – for the final fifty years of his life, the southern writer lived in Memphis and in 1982, he received an honorary degree from Rhodes College (then Southwestern College).  Upon the college’s acquisition of the Shelby Foote Collection, private library consultant Carol McCarley and Rhodes history fellows Jordan Redmon and Lauren Peterson (both class of 2013) created a finding aid for the materials, which include over two thousand volumes of classic literature and interpretation, drafts and manuscripts of Foote’s works, research notes, Foote’s personal correspondence, and family photographs.  But most importantly for the college’s current research – and for this digital history project – the collection also includes Foote’s personal diaries.
​
Beginning in 1941 and continuing through 2001, Foote’s diaries offer valuable details about the writer’s daily life, habits, and writing process.  After Foote completed his final novel, he wrote nearly every day in his diaries, and from 1978  through 1999, Foote diligently recorded his thoughts in his signature script.  Redmon and subsequent Shelby Foote student fellows began transcribing the diaries.  In the fall of 2013, Rhodes students enrolled in a Foote-themed course also contributed to the transcription effort, deciphering Foote’s entries for 1991.

Designed and taught by Professor Timothy Huebner of the Rhodes College History Department, this introductory history seminar, “Shelby Foote, the South, and the Civil War,” was first offered in the 2013 fall semester and again in the 2016 spring semester.  Students studied Foote’s life, works, and interpretation of the American Civil War by reading Stuart Chapman’s recent biography, Foote’s well-received novel Shiloh (1952), and the first volume of Foote’s Civil War narrative, among other works.  But the course also provides the rare opportunity for original undergraduate research, requiring freshmen and sophomores to utilize the Shelby Foote Collection in their classwork and assignments.  Specifically, the 2013 class transcribed the 1991 diary because Foote had entered the national spotlight in September of the previous year, making his television debut in Ken Burns’s acclaimed PBS Civil War documentary.  For their part, students in the 2016 course contributed to this digital history project by annotating Foote’s diary entries for 1990 and part of 1991, and by writing the short essays under "Further Reading."

This digital history project offers a snapshot of Foote’s life in the early 1990s as he finally received popular recognition for his work.  Each of Foote’s diary entries has its own page on this site, and each page includes a scan of the original handwritten diary page, a transcription, and annotations.  This site also provides scholarly essays on Foote as well as several photographs unique to the Shelby Foote Collection.  Rhodes College supports this digital history project, which is led by Professor Huebner in collaboration with student history fellow Madeleine McGrady (class of 2017) and the Mellon Grant faculty and fellows.