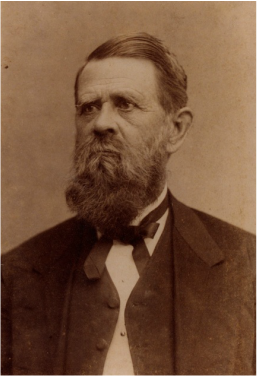 Shelby Foote's great-grandfather, Hezekiah William Foote, who fought at the 1862 Battle of Shiloh. Box 50, folder 7, Shelby Foote Collection, Rhodes College, Memphis, TN.
On his father’s side, Shelby Foote claimed a distinguished southern lineage. In 1688, his ancestor Richard Foote traveled from England to the colonies, where he inherited a profitable plantation estate and socialized with prominent Virginia families in Prince William County. Several generations later, Shelby Foote’s ancestors had resettled in Union County, South Carolina, where his great-grandfather Hezekiah William (H.W.) Foote was born in 1813. In addition to living the life of a planter, H.W. Foote pursued law and politics, and in 1840, he moved west from South Carolina to Macon, Mississippi. From there, he served in the Mississippi House of Representatives as a member of the Constitutional Union Party and, as follows, “opposed secession with all the fervor of his mature manhood.”[1] But when Mississippi seceded in January 1861, H.W. Foote loyally served his state as the colonel of the 1st Mississippi Calvary, leading his unit into the Western theater, including the April 1862 Battle of Shiloh.[2] Of course, one century later, Shelby Foote would take a special interest in his great-grandfather’s Civil War involvement and write a novel about the Battle of Shiloh. Reflecting on this subject material and the Shiloh battlefield itself, Shelby Foote explained, “For me, something emanates from that ground, the way memory sometimes leaps at you unexpectedly.”[3] 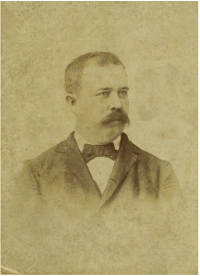 Hugh Foote, Shelby Foote's paternal grandfather. Box 50, folder 7, Shelby Foote Collection, Rhodes College, Memphis, TN.
Returning to Mississippi after the war, H.W. Foote resumed his political career as a state senator. At the same time, he groomed his son Hugh Foote to take over the 3000-acre family plantation in the rich Mississippi Delta soil. In the last few decades of the nineteenth century, the inexpensive Delta land flourished and the Foote family acquired five more plantations, including the impressive Mount Holly. Thanks to the high cotton demand at the turn of the twentieth century, Hugh Foote accrued a fortune – “close to a million dollars,” according to his grandson – and like his father, Hugh Foote balanced his farming responsibilities with a political career, serving in the Mississippi State Senate. By 1910, however, plantation life no longer stimulated Hugh Foote and in that year, he put Mount Holly up for sale and moved his family to Greenville, a town that fed his gambling addiction. By the time that Hugh Foote died in 1915, he had gambled away the family fortune, epitomizing the hard luck of the Delta and leaving nothing for his son, Shelby Foote, Sr. Despite his limited economy, Shelby Foote, Sr. married Lillian Rosenstock, the daughter of a then-successful immigrant planter, and in 1916, their son Shelby Foote the writer, was born.[4] Fascinated by his paternal family’s former planter glory, Shelby Foote explored life of the Delta elite in his first few novels. As his biographer Stuart Chapman observed, Shelby Foote spent “his life and writing career poised pregnantly between a wish to have been part of a Southern elite and a thankfulness that his grandfather had saved him from the privilege of that rank.”[5]